03 May: London at the polls

On 3 May, London’s 32 Borough Councils go to the polls. In the first of several blogs leading up to the day itself, LCA Research Executive Stefanos Koryzis outlines what we now know about where the parties currently stand and maps out the road ahead.   The 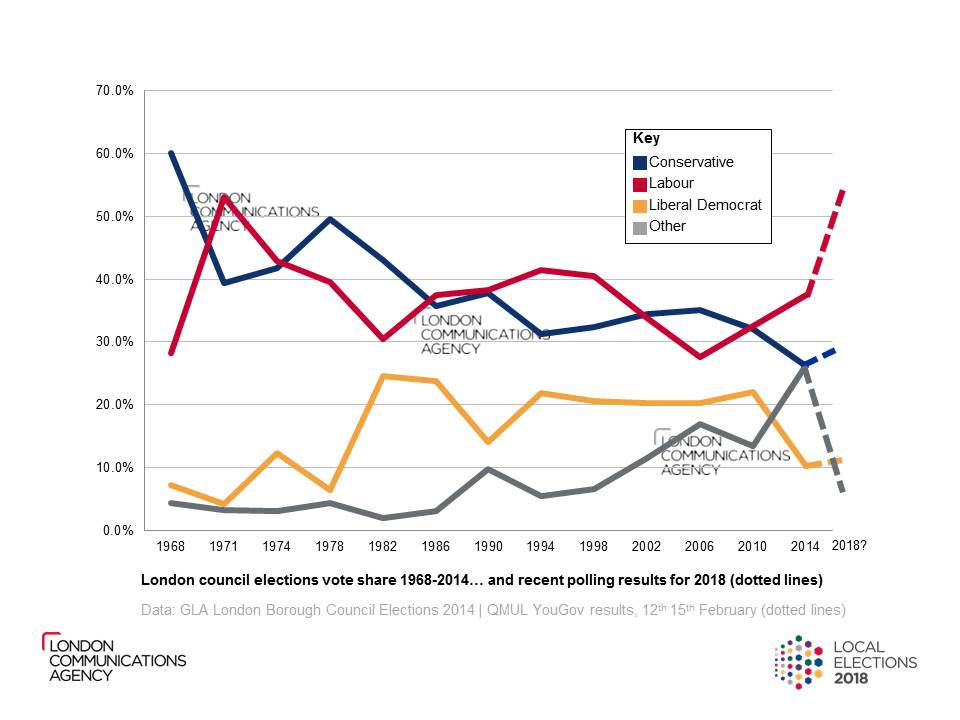 On 3 May, London’s 32 Borough Councils go to the polls. In the first of several blogs leading up to the day itself, LCA Research Executive Stefanos Koryzis outlines what we now know about where the parties currently stand and maps out the road ahead.

The 3 May local election is 66 days away, a long time in the fickle world of politics. The available polls on public opinion and voting intention (more below), serve as a valuable bellwether, but give us only a partial and fleeting glimpse at likely outcomes.  The voting public, as always, remains a mysterious and mercurial beast which seemingly takes glee in exasperating pollsters and pundits. But there are more clues out there as to what we can expect and some first trends and patterns are emerging.

This blog offers an overview of the current state-of-affairs in London-wide polling and party politics. Subsequent blogs by the LCA team will closely examine individual parties, boroughs and issues, providing more detailed and nuanced views of the capital’s political landscape.

So what do opinion polls and voting intention surveys tell us about how well the parties are actually likely to do? The major national polls’ sample sizes for London are low – making any insight about the capital from these of limited use.

QMUL’s polls give us the most in-depth and reliable view of parties’ performance, as the latter jostle for voters’ attention and support. The latest QMUL poll's results – released last Wednesday - confirm broader expectations that London as a whole is swinging to the left, quite possibly carrying several true blue boroughs into the red. YouGov was commissioned to carry out the survey, which questioned 1,155 Londoners between 12 and 15 February.

Voting intention for the local elections (weighted by likelihood to vote and excluding those who stated they will not be voting or were undecided) stands at 54% for Labour, 28% for the Conservatives, 11% for the Liberal Democrats, and 7% for 'other' parties (including the Greens and UKIP). If such a vote materialised this May, Labour would have won the highest vote share any party has achieved in London borough elections in half a century. Since the poll was published, QMUL Mile End Institute Director Professor Philip Cowley has told the BBC that the Tories could potentially be whittled down to as few as one or two London boroughs.

The poll also notably disaggregates responses for respondents in inner and outer London. Their different demographics, built environment, local economies and party-political makeup make this distinction extremely significant. Outer London has traditionally been the preserve of the Tories and Liberal Democrats (though increasingly less so over the past few local, Mayoral/London Assembly and general elections), whereas Labour has done better in inner-city boroughs. The poll indicates that both parts of the capital are continuing to shift towards the left, with Labour leading in both outer London (with 47% to the Conservatives’ 34%) and inner London (with 67% to the Conservatives’ rather paltry 17%). According to QMUL’s estimate, the swing towards Labour in central London since 2014 is a whopping 13.4%, while suburban outer London has swung a more moderate 4.2% in Labour's favour. Assuming it can hold its current seats and depending on other factors such as turnout, such a swing could conceivably put Labour in charge of outer London Barnet and also inner London Wandsworth and Westminster (all currently held by the Conservatives).

Voting intention aside, it is important to note what the poll’s respondents said about the issues most important to them (they were given the option of picking three). Housing perhaps unsurprisingly tops the list (33%) followed by local services and facilities (29%), health (28%), Council Tax (25%), crime (23%) and Britain leaving the EU (21%).  Previous polls over the past three to four years have also shown housing at the top, reinforcing that this is a key area for politicians to consider in preparing their pre-election manifestoes and campaign strategies. Could parties positon this as the first London local election referendum on housing, much as Sadiq did in the 2016 Mayoral election?

This focus on housing certainly helped Sadiq win his huge victory in 2016 and even now the poll found that a significant 54% of respondents in this latest poll by QMUL think that he is doing well in City Hall (10% very and 44% fairly), a pretty good position after nearly two years in charge.

Finally, it is worth noting that the poll found voting intention in London for a possible snap general election stands at 53% for Labour and 33% for the Conservatives.

Reactions to the QMUL poll

The poll elicited a number of strong reactions, indicating that it has generated unease among Conservatives.

Party Chairman Brandon Lewis has reportedly told The House magazine that the Tories are facing “difficult” borough elections and a “very challenging dynamic” in London especially. Other Tories, speaking under the condition of anonymity to the press, have been less diplomatic. The Financial Times quotes an unnamed Conservative official as predicting a “bloodbath” for the party in May; and a former Conservative Minister is cited by the Evening Standard as suggesting that many Tory MPs are treating the May local elections as a litmus test for Theresa May’s legitimacy as Prime Minister.

But Councillor Nickie Aiken, the Conservative leader of Westminster council, has been cited as being “sceptical of the results” and flatly denying that a loss in her borough will happen. “I’m certainly not complacent but our track record speaks for itself,” she told the Financial Times, adding that “the response we are getting across Westminster on the doorsteps is that they trust us.”

Polls aside, the LCA team closely monitors political developments across the capital and can draw on a range of on- and off-line sources to take regular readings of the prevailing climate. Our intelligence broadly corroborates the results of QMUL’s poll, suggesting that London politics will remain very much dominated by the Labour and Conservative parties, whose collective hold over England as a whole remains strong (but with Labour decisively ahead in the capital).

Labour has performed consistently better in London over the past few electoral cycles - specifically  since 2010, when they lost control nationally but on the same day came storming back in the local elections in London, from a very low base in 2006. With its vote share expanding, Labour is widely expected to hold its current territory and even make further gains. The party can leverage its greater appeal among younger, minority and cosmopolitan voters - and all indications are that it is well-placed to make inroads in Tory strongholds. The expanding influence of Momentum, the party’s leftist pro-Corbyn faction, represents an interesting development. It is believed to have helped mobilise a new generation of young activists as well as bring older leftists back into the fold. But the Corbynistas’ aggressive activism could perhaps also serve to alienate moderate Labourites and mobilise right-of-centre voters fearful (rightly or wrongly) of ‘Marxists taking over town halls.’

For their part, the Conservatives are undeniably on the back foot in London. Their own party grandees, including Syed Kamal MEP and Lord Hayward, have been sounding the alarm long before this latest poll. Brexit divides the party, perhaps more so in London than anywhere else, and an electorate could use the ballot box to vent their frustrations with Conservative-led governments in Whitehall for almost the past decade (Sadiq Khan recently urged them to do just that). For all its enthusiasm, the party’s army of activists is widely believed to be ageing, too male-dominated, ethnically homogenous, and disproportionately concentrated in ‘prime central’ post codes and suburban outer London. During Theresa May’s January reshuffle, the party shook up its campaign headquarters and London machinery and is pushing to diversify its roster of candidates. The Independent, however, cited a Cabinet Minister as admitting only three weeks ago that there is still no comprehensive campaign plan in place. As the party’s Chairman said last week: “We’ve got work to do in London.”

The Liberal Democrats have yet to recover fully from the political battering they received in the 2015 General Election. In London, they have receded to their traditional heartland in the south-west, where they hold only one Council (Sutton) and a smattering of Parliamentary Constituencies. But the party’s activists and leadership are no strangers to clawing themselves out of the political wilderness. With a membership boosted by indignant Remainers and a hardened local campaigning cadre, the party could consolidate its position south of the Thames and make gains elsewhere.

The Greens and UKIP, never heavy-hitters in the capital, appear to be dangerously squeezed in the post-EU Referendum era. It is hard to imagine UKIP making a comeback, especially considering the party’s apparent inability to rally around a new leader. Similarly, the Greens are looking all the more beleaguered as Jeremy Corbyn chips away at its base. But, if they concentrate resources and leverage long-serving councillors’ experience and record, they could well hold a scattering of seats.

Despite expectations that major parties will dominate overall, independents and local political groups could well prove a force to be reckoned with in some wards and a few boroughs. In some areas, local groups are set to vigorously contest seats. In Kensington & Chelsea, the centrist Advance could capitalise on a groundswell of dissatisfaction across party lines following the Grenfell Tower fire; and in Tower Hamlets, Aspire could reunite former supporters of Lutfur Rahman (though the disgraced former Mayor himself is barred from running). And in an electoral landscape where as few as 600-700 votes secured a ward seat in 2014, wildcards are never off the table.

Party candidate selections appear to have been completed by the major parties in most boroughs, but are ongoing elsewhere – generally due to infighting at the local level. It is notable that while Labour appears to have selected its lead candidates for three of the four London Boroughs which have a directly elected Mayor, its Mayoral candidate selection in Newham has been pushed back due to internal disputes surrounding the local party’s 2016 ‘trigger ballot,’ which originally re-selected Sir Robin Wales (the incumbent Mayor) to stand again in May. A new ‘open selection’ process is to be held on 1 March, when Sir Robin will face his challenger Labour Councillor Rokhsana Fiaz, only a hair’s breadth from the election itself. Similar drama is playing out – sometimes in the open, and sometimes behind closed doors – at local party branches, across the political spectrum and throughout London.

The pre-election period begins around 26 March, after which point restrictions begin to apply on elected officials’ activities. Prospective council candidates will have to submit their nominations’ paperwork by 6 April and Returning Officers are expected publish the names of ward candidates on 9 April. The deadline for voters’ registration is 17 April (18 April for those voting by post). On Election Day itself, 3 May, polls will be open 6am-10pm and (breaking from tradition) the announcement of results is expected to start in the early morning of 4 May.

Following the election and over the course of May and June, individual Councils will be confirming their leaders (and there could be several new ones depending on the election), forming their Cabinet and selecting the membership of their various Committees and Sub-Committees. This period will be especially critical for understanding how Councils will be run in the subsequent four years.