Don’t lead me this way – Borough leadership in London

With the next borough elections fast approaching, LCA’s Chairman Robert Gordon Clark and LSE Professor Tony Travers ponder the causes – and possible consequences – of an unusual amount of churn among London’s local leadership.

Before and after each election there are always changes to borough leaderships – some necessitated by a change in political control, some following a ‘coup’ within a ruling party’s group and sometimes through well managed succession planning, with seasoned Leaders making way for the next generation in an orderly fashion

But in a period of just over three years, from late May 2018 through to the summer of 2021, there has been an intense amount of change, more so than in any time that we can recall over the last 20 years. This, we felt, merits some analysis.

Looking back briefly, as New Labour headed towards the end of a decade in power, the 2006 elections saw a significant shift away from Labour to the Conservatives and Liberal Democrats, leading to six ‘No Overall Control’ (NOC) councils and the best result for the Conservatives in London since 1968.

Conversely the 2010 elections, held on the same day as that year’s General Election – the end of Labour’s 13-year reign - saw a surprise resurgence for the party in London. Local elections in 2014 and then 2018 saw Labour strengthen their political hold in the capital, so that following the May 2018 elections – and to this day – Labour control 21 of London’s 33 boroughs, close to a record high following the formation in 1965 of the boroughs as we know them today.

Chart 1 below shows the Leaders of the 33 local authorities in London just after the 2018 local elections. 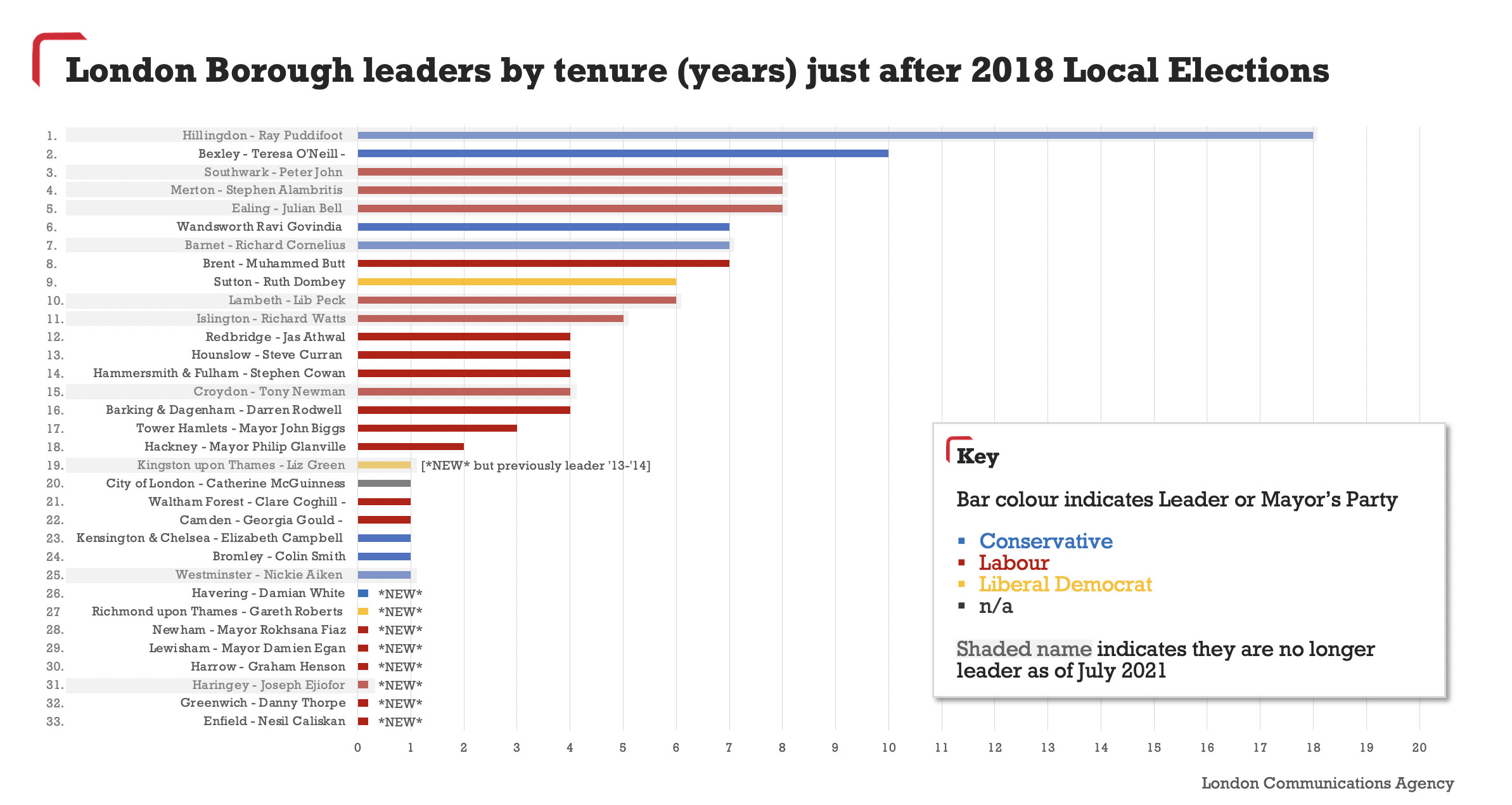 The election itself produced six new Leaders and two new directly-elected Mayors. Rokhsana Fiaz (Newham) and Damien Egan (Lewisham) replaced very long-standing Mayors Sir Robin Wales and Sir Steve Bullock who, between them, had over 30 years’ leadership (as Leader and/or Mayor). Some, such as Nesil Caliskan in Enfield, did not actually lead their group into the election but in her case took over via a challenge at the local party’s AGM that year, replacing another experienced Labour Leader, Doug Taylor.

A further seven had become Leaders only a year or less before leading their groups into the election, which then consolidated their position. That means that as the dust of the 2018 election settled, nearly half (15 to be precise, from Liz Green in Kingston down on the chart) of the boroughs’ Leaders had been in post for a year or less.

This level of change was in itself quite significant, so one might have expected a period of relative stability to follow. But since then, no less than 11 Leaders (shaded grey above), or one third of the total, have been replaced (in the case of Lambeth, twice). This includes seven of the longest serving 11 who had led their councils since at least the 2014 election. Nine of these Leaders have stepped down or were replaced after a “coup” over the course of 2020 and 2021 alone.

The combined tenure of these 11 Leaders amounts to almost 100 years of experience.

Chart 2 provides a summary of where we now are. 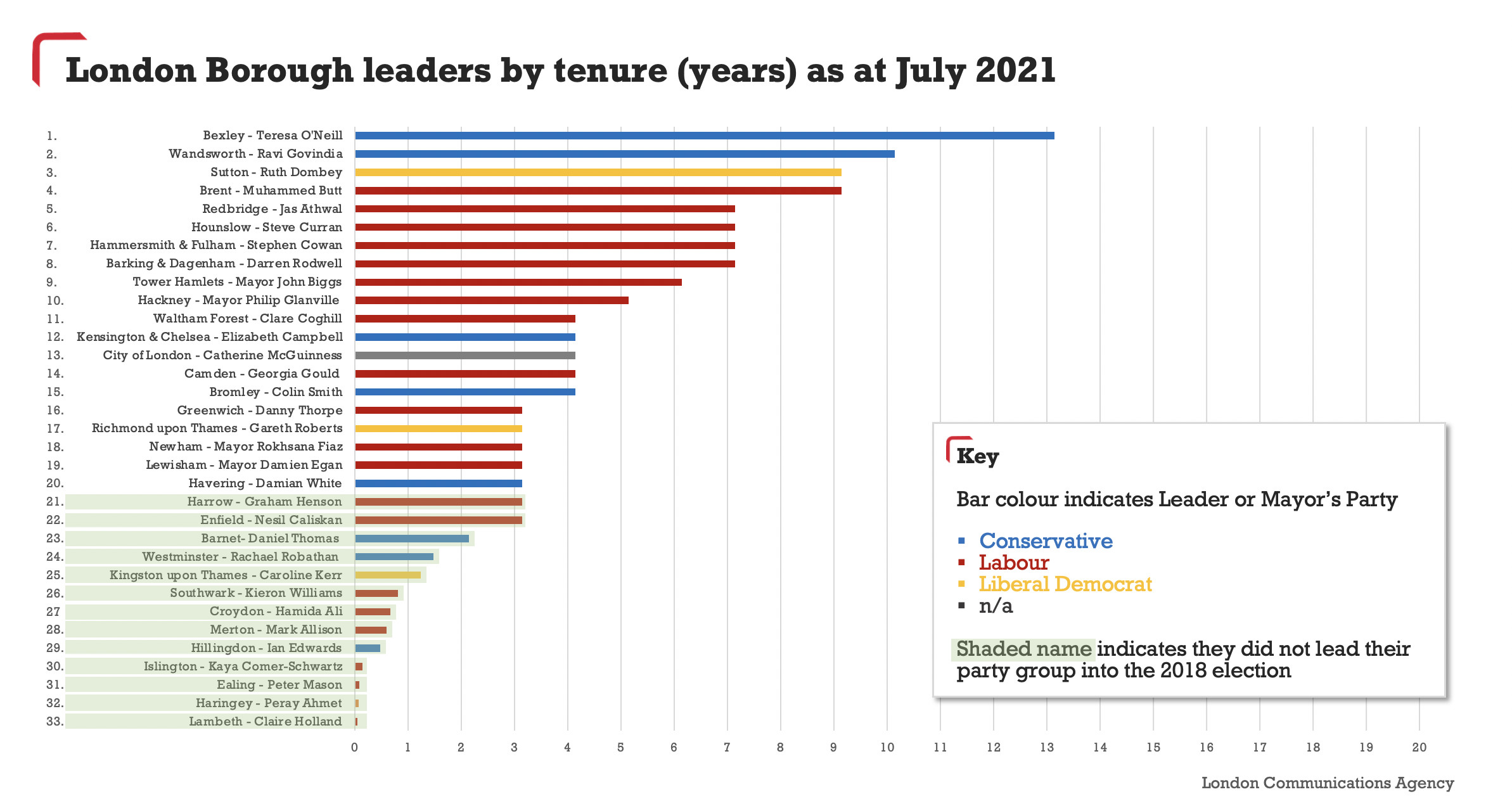 As we run up to the local elections next May, it is worth noting the relative inexperience of many of these Leaders. 23 out of 33 have been in post for less than five years and 13 were appointed after the May 2018 elections, meaning they have yet to lead their party in a local election campaign.

These numbers do not include one Leader, Clare Coghill of Waltham Forest who is stepping down and her replacement – Grace Williams – is expected to be formally appointed shortly.

WHY SO MANY CHANGES?

There are clearly different reasons for each change.

First, much of the churn has been in Labour boroughs where often very public divisions have been at play within the local party. It may be that this is a natural consequence of the party’s dominance in some boroughs, leading to the eventual appearance of an ‘opposition from within’ – Newham and Haringey come to mind here.

But Ealing, Haringey, Lambeth, Croydon and, to a lesser extent, Southwark have all seen political factors played out in the public domain for reasons as varied as Low Traffic Neighbourhood (LTNs), left-right positioning (reflecting national Labour Party factionalism and the ongoing impact of Momentum), the council’s financial management or simply a sense that a leader has “had his/her turn”.

That said, there are also smoother examples like the change in Merton, where Stephen Alambritis handed over to Mark Allison who had served as deputy for most of his 10 years at the helm

By contrast the Tories have tended to do things with rather less drama. For example, the change over from long standing Conservative Leader in Hillingdon Ray Puddifoot to Ian Edwards had parallels with the change in Merton. However, the transfer in Barnet from Richard Cornelius to Daniel Thomas had its moments and Westminster City Council, arguably the most high-profile of all London and UK local authorities, has seen three Leaders in the space of four years (though these were largely because of career changes, such as Nickie Aiken being elected as the local MP).

Undoubtedly, managing the impact of Covid and Brexit following 11 years of austerity has taken a serious toll on those at the helm. This particular trinity has made the usual job of a borough Leader - balancing the expectations and ambitions of their political groups (in some cases nervous about boundary changes to wards) with the needs and desires of the wider public - consistently challenging and often impossible.

And as is the case for all politicians, the round-the-clock scrutiny and criticism generated via social media has undoubtedly upped the intensity and required resilience, likely another contributing factor to the shorter shelf-lives of Leaders lately.

WHAT COULD THIS ALL MEAN FOR NEXT MAY?

This coming May there are a lot of relatively new Leaders fighting to prove themselves. And while Labour boroughs like Islington, Lambeth, Southwark and Ealing are highly unlikely to see a change in political control, current majorities could be reduced, potentially weakening the position of those Leaders seeking a full term from 2022 to 2026.

Meanwhile, there are new Leaders in at least six key “swing” boroughs.  Labour’s Hamida Ali (Croydon), Mark Allison (Merton) and Nesil Caliskan (Enfield) will all need to find convincing narratives for their manifestos ingredients and form the right alliances within their local parties to keep a viable working majority. Rachael Robathan (Westminster) and Daniel Thomas (Barnet) will be doing the same for the Conservatives, as will Caroline Kerr for the Lib Dems (Kingston).

And whilst experience is clearly a vital ingredient in political campaigning, LCA will of course be watching closely boroughs like Wandsworth, where Ravi Govindia is now the second longest-serving Leader but faces another tight election battle with Labour, and Bexley, where Teresa O’Neill (now the longest-serving leader) seeks to further consolidate the Conservatives’ strength.

AND THEN AFTER THE LOCAL ELECTIONS?

If the current Leaders don’t do as well as local activists are expecting, but the incumbent party still holds on, we might expect some challenging AGMs immediately after the election - not dissimilar to the way Enfield changed Leader in the summer of 2018.  And we will also be keeping a close eye on how the Directly Elected Mayoral contests play out in Newham, Hackney, Lewisham and especially Tower Hamlets. Before then there is also a referendum this autumn to introduce the Mayoral model in Croydon.